Many people find themselves clueless when they learn that somebody close to them has been placed in jail. Their anxiety is compounded by the fact that they do not know how to go about securing his/her release. This lack of knowledge becomes a problem when time is of the essence. Additionally, finding a trustworthy Irvine bail bonds agent of caliber is by no means an easy task.

If you are looking for bail bond agents in Irvine, or Orange County bail bonds, experience should form the main criteria. Judging by our commendable 60-year record of being in business, Angels Bail Bonds is unquestioningly the most reliable company in the Irvine area of Southern California. Our bail services are renowned in California for their promptness. Indeed, no other Irvine bail bondsman can match our quest for delivering excellence in bail services.

Angels Bail Bonds enjoys a reputation for efficiency in posting bail bonds in Irvine. As our bail bond agents possess in-depth bail bonds information besides comprehensive knowledge of the legal system and are responsible for securing the release of a sizable number of arrestees from Orange County jails. We respect privacy and will be very discreet when taking care of your situation. Our bondsmen have successfully handled the most complicated cases related to bail bonds in Irvine.

So if you want a professional bondsman in California, we are at your service, 24 hours a day, 7 days a week. In addition, a Angels Bail Bonds agent will be more than willing to provide specific bail information.

What you need to know about bail bonds in Irvine

If you’re reading this right now, that means that the unthinkable has happened. Someone you know and love has been arrested and you want to get them out of jail. You probably have many questions about how bail bonds work and what to do next. The process of getting someone out of jail can seem overwhelming at first, but in actuality, it is a very simple and straightforward procedure. On this page, you’ll find all of the info you need in order to make informed decisions about what to do in this situation. This is a free service provided by Angels Bail Bonds. If at any time you wish to talk to a friendly and professional bail bonds agent you can do so by dialing 949-367-1727, we have agents at our office right now to give you real help now. You need to know your rights.

What happens when someone is arrested in Irvine?

When someone is arrested in Irvine they are taken to one 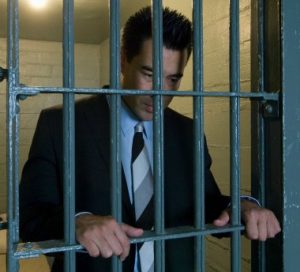 of two locations, the Irvine City Jail or the James A. Musick Facility and processed as an inmate. As part of this process, their fingerprints are taken and checked against a number of databases to determine their identity and if they have any outstanding warrants. A mug shot is also taken. The process of checking into Irvine Jail may be much quicker than at the County Jail. After they have been checked in they are eligible to be bailed out of jail in minutes by a licensed bail bonds agent.

Once the inmate has been processed into jail their bail amount will be determined. As of right now in 2016 there is not standard for determining what your bail is going to be. It is 100% dependent on what the judge determines it should be.

In order to be bailed out of jail in Irvine, there are a few options.

2. Employ the services of a bail bondsman, who typically charge rates of 10% of the total bond amount. 10% is not the lowest rates and there are special circumstances where you can get bailed out for less, but collateral may be needed. The fee, a bail bondsman charges is a non-refundable, one-time fee for posting the bond. This money is paid to the bail bondsman for the service of putting up the full bond amount with the court.

In addition to the 10% payment to the bail bondsman, someone will also have to sign on behalf of the defendant as the indemnitor, guaranteeing that they will make all of their court appearances and that they are financially responsible for that person in case they don’t go to jail. We accept all major credit cards and have exclusive financing options to assist in helping you get your loved on out of jail fast. We have bail agents ready to take your call now.

Which Irvine bail bonds agent is best for me?

It is important that you choose a bail bonds company that has a strong reputation in the community it serves. We recommend that you check out the Yelp page of any Irvine bail bondsman that you are thinking about using so that you can get unbiased opinions from third parties about the quality of the service provided by that bail agency. There are a number of companies to choose from when looking for bail bonds Orange County, please do your homework and read reviews. Just because you have been arrested it doesn’t make you a criminal. Get real help.

Where is the Irvine Police Department?

Check out the victim’s assistant services and programs here. The domestic violence assistant program can be reached at (714) 935-7956.

You can also visit the department’s website for further information.

Our agents cover all areas. Call us for Real Help Now!

Where is the Irvine Jail?

When we are helping those who need bail bonds in Irvine we spend a lot of time at the local Irvine jail. The Irvine jail is located in the same complex as the police department. It is at 1 Civic Center Plaza, Irvine, CA 92606. You can call the jail at 949-724-7000. This is a 24-bed jail facility which can receive male, female and juvenile inmates.

Get Real Help from a Licensed Irvine Bail Bonds Agent!

There is also a chance your loved one could be transferred to the Orange County jail, which has its own completely different set of rules and procedures. Read more about Orange County bail bonds.

Who is the chief of police in Irvine?

To ensure quick release, our team of bail bondsman in Irvine have a great relationship with the Irvine Police Department.

Who is the mayor of Irvine?

Steven S. Choi, Ph.D. is the mayor of Irvine. Mayor Choi was re-elected to the position of Mayor in 2014 after serving two years previously as mayor and eight years as a city councilman. Prior to serving the city as a city councilman, Choi served six years as Trustee of the Irvine Unified School District. Mayor Choi earned his bachelor’s degree from Jyung Hee University in Seoul, Korea. He earned his master’s degree in Library Science from Louisiana State University and his doctorate in Library and Information Science from the University of Pittsburgh.

Who are the representatives for Irvine?

Irvine was designed to be a fully master planned city by architect William Pereira and Raymond Watson of the Irvine Company in the 1960’s. The city is divided into over 30 “villages”, each with residential developments, schools, shopping centers, religious institutions, and parks or green spaces. Each village is divided from other villages by six-lane streets. The city encompasses 66 square miles and was incorporated in December of 1971.

The good news is Irvine has been ranked on the “America’s Safest Big City” list by the FBI every year since 2005.

Are you ready to get real help now? Call us for all Irvine Bail Bonds services!