Angels Bail Bonds is the ideal destination for those seeking Costa Mesa bail bonds. Our bail bond agents have provided bail services to families residing in Orange County, California, for several years. So whether you are looking for a reliable bail bondsman to arrange a bond or want in-depth bail bond information, our staff and website will prove extremely useful. If a relative or close friend of yours has been unfortunate enough to land in jail, we will be more than willing to help you.

Being one of the bail bonds in Costa Mesa, we pride ourselves on the competency and professionalism of our bail services. Our deep understanding of how the jail system functions, legal procedures, bail process, and the release requirements of the local jail, makes us one of the most effective, reliable and prompt agents in the area. We know that speed is of the essence when posting bail, as it significantly reduces the anxiety and emotional distress suffered by the arrestee’s family. This knowledge drives them to provide the most efficient service in the Costa Mesa area. Moreover, we can be relied upon to maintain complete confidentiality.

Below you will find comprehensive information that sheds light on all possible aspects of the bail bond process.

We have over fifty years of experience in Orange County. We post bail for all amounts, we accept all payment methods and collateral, and we can meet you at your location for convenience. Our licensed bail bondsmen operate 24 hours a day, 7 days a week and we can reach you fast. We can also provide payment plans for the total bail amount.

We are open 24/7. Our staff will respond in minutes.

What do you need to know about how bail bonds work?

If you’re reading this right now, that means you are facing a difficult and potentially confusing situation. Someone you know has been arrested and you are trying to get them out of jail. You probably have a lot of questions about what steps to take next. The process of getting someone out of jail seems overwhelming at first, but in actuality, it is a very simple and straightforward procedure. On this page, you’ll find all of the information you need in order to make informed decisions about what to do in a situation of needing a bail bond in Costa Mesa. If at any time you wish to talk to a friendly and professional bail agent, confidentially, you can do so by dialing us now!

When someone is arrested, they are taken to the Costa Mesa City Police Department Jail and processed as an inmate. As part of this process, their fingerprints are taken and checked against a number of databases to determine their identity and if they have any outstanding warrants. A mug shot is also taken. After they have completed this process, they are eligible to be bailed out of jail. The Costa Mesa Jail is a type 1 facility with 32 beds.

The fee the agent charges is a non-refundable, one-time fee for posting the bond. This money is paid to the bail bondsman for the service of putting up the full bond amount with the court. In addition to paying the 10%, someone will also have to sign on behalf of the defendant as the Indemnitor, guaranteeing that they will make all of their court appearances and that they are financially responsible for that person in case they don’t go to jail.

What is considered good collateral?

Which local bonds company should I use?

It is important that you choose a bail bonds company that has a strong reputation in the community it serves. We recommend that you check out the Yelp page of anyone that you are thinking about using so that you can get unbiased opinions from third parties about the quality of the service provided by that bail agency.

How long does it take to get someone out of jail?

Paperwork takes about 15-30 minutes. After the arrest, the jail receives our paperwork it generally takes an hour or less for local police departments and 2-4 hours for county jails. It can take longer if a jail facility is extremely busy. Call us now!

A few jurisdictions do allow cash to be posted by a citizen if he or she posts the entire amount of the bail bond. With a bail company you only have to pay about 8-15% of the entire bail bond amount.

A person may occasionally be able to avoid jail time by only pledging to show up for all scheduled court dates. This type of release is referred to as “own recognizance” or “O.R.”

Where is the Costa Mesa Police Department?

Where is the nearest local jail?

The Costa Mesa City Police Department Jail is located in the same complex as the police department at 99 Fair Drive, Costa Mesa, CA 92626. The Costa Mesa Jail’s 24-hour phone number is (714) 754-5113. The Costa Mesa Jail also has information on its website. The Jail is a type 1 facility with 32 beds. Jail arrestees are generally released or transferred in 24 to 48 hours.

If you have a family member or loved one who did a crime, Bail Bonds can definitely help you. Family member can contact us 714-660-4788 if you need more information regarding the cash bail and payment options. We also have Bail Bonds in Santa Ana.

99 Fair Drive, Costa Mesa, CA 92626
Who is the chief of police?
Chief Rob Sharpnack is the chief of police in Costa Mesa. He has served as the head officer since June, 2015. Chief Sharpnack is a 22 year veteran with the department and prior to being named chief, he served the department as interim chief after the departure of Chief Gazsi. Chief Sharpnack began his Costa Mesa Police Department career in 1993 as a Custody Office and was soon appointed to a Police Officer. Moving through the ranks he became a Captain in 2013. He has a Bachelors degree in Business Administration from Vanguard University.
Who is the mayor of the city?
Stephen Mensinger is the mayor of Costa Mesa. Mayor Mensinger was appointed mayor in 2014. He has served on the Costa Mesa City Council since 2011, when he filled a vacated seat. Mayor Mensinger was elected to the City Council in November, 2012. Prior to his work on the City Council, Mensinger was the Costa Mesa Planning Commissioner. He is the author of Civic Openness in Negotiations (COIN) Ordinance. Mayor Mensinger is a graduate of the University of Southern California and has been a resident of Costa Mesa for 30 years.
Who are the local representatives of the region?
Costa Mesa is in the 37th Senate District in the California State Senate and is represented by Republican John Moorlach. Within the California State Assembly, Costa Mesa is in the 74th Assembly District and is represented by Republican Matthew Harper. Costa Mesa is in the 48th district in the United States House of Representatives and is represented by Republican Dana Rohrabacher.
Demographic data about the area
As of 2010, the population in Costa Mesa is 109,960. This is an increase from the 2000 census of 1.1 %, the population at that time was 108,724. The estimated population for 2014 was 112,784. The population of Costa Mesa consists of the following: 75,335 (68.5%) White, 1,640 (1.5%) African-American, 686 (.6%) Native American, 8,654 (7.9%) Asian, 527 (0.5%) Pacific Islander, and 17,992 (16.4%) from other races.
Fun Facts about Costa Mesa
Costa Mesa is home to the Orange County Fairgrounds, where the County Fair takes place every July, drawing more than one 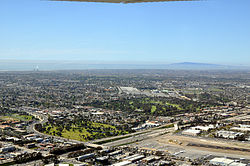 million visitors each year. The Fairgrounds also hosts the Annual Scarecrow and Pumpkin Festival; the first festival was held in 1938, after not being held for decades the festival returned in 2013. Costa Mesa has a strong arts culture; it is home to the Pacific Amphitheatre, Segerstrom Center for the Arts and the South Coast Repertory Theater.

Costa Mesa is a thriving city with 28 parks and two municipal golf courses. The city has 20 public schools and three libraries. Throughout the city of Costa Mesa, there are several colleges; Orange Coast College, Vanguard University, National University and Whittier Law School.

Costa Mesa was incorporated 1953, at which time the city was nicknamed “Goat Hill,” due to its rural feel. Costa Mesa was officially named on July 16, 1920; prior to this, the city was called Harper.  Harper was easily confused with the nearby city of Haperville, therefore it was renamed through a contest. Costa Mesa means “coastal tableland.”

If you are looking for a Local Costa Mesa Bail Bonds company, make sure you call us immediately.