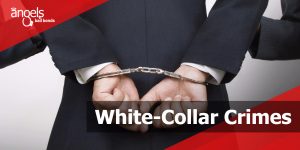 The term “white-collar crime” was coined in 1939 during a presidential speech given by Edwin Sutherland to the American Sociological Society. Sutherland described the term as “a crime committed by an individual of respectability and high social status in the path of his occupation.”

And if ever you get convicted of white-collar crime, you can contact Angels Bail Bonds and their numerous bail bondsmen all over Los Angeles and Orange County to help you. You can learn about how bail bonds work here.

What is a White-Collar Crime?

White-collar crime is a nonviolent crime perpetrated for financial profit. Securities fraud, embezzlement, corporate fraud, and money laundering are some examples of white-collar crimes, regularly investigated by the FBI, the National Association of Securities Dealers (NASD) and the Securities and Exchange Commission (SEC). Some high-profile individuals sentenced to white-collar crimes include Kenneth Lay, Bernard Madoff, and Bernard Ebbers.

White-collar crimes get their name from the types of individuals who usually commit the kind of financial fraud, comprehending business managers, fund managers, and top executives and directors. Individuals can face time in prison and steep fines in case of conviction of white-collar crime. The federal government can as well pursue financial damages from corporations and banks that commit a white-collar crime on an institution-wide level.

An example of White-Collar Crime committed by an individual and one of the most well-known white-collar offenders is Bernard Madoff, convicted in 2009 of a substantial fraud that cost investors $65 billion. Bernard Madoff, sentenced to 150 years in prison, ran an elaborated Ponzi scheme, which promised significant gains on investments. For many years, Madoff used capital from new investors to pay preceding investors without really investing the funds. Madoff’s system fell apart when a significant number of investors demanded to have their money back, and Madoff was incapable of paying them.

Corporate white-collar crime typically involves a large-scale fraud committed throughout the institution. For example, Credit Suisse pleaded guilty in 2014 to helping U.S. citizens evade paying taxes by concealing income away from the Internal Revenue Service. The bank accepted to pay fines and penalties of $2.6 billion.

Also in 2014, Bank of America recognized it sold billions in mortgage-backed securities (MBS) attached to properties with inflated rates. These loans, which did not have decent collateral, were amongst the types of financial misdeeds that led to the economic crash of 2008 in the United States. Bank of America agreed to pay $16.65 billion in losses and admit to its malpractice.

The most important types of white-collar crimes are:

It is the process of forming the appearance that large amounts of money gained from a criminal enterprise, such as drug trafficking or terrorist activity, came from a genuine source. The money from the illicit activity is considered dirty, and the process “launders” the money to make it look clean.

Blackmail is a crime where the blackmailer demands goods, services or money in exchange for not revealing information that would be harmful to the blackmailed person. This information may be either true or untrue. Extortion, on the other side, is a crime where the extortionist demands goods, services or money through coercion. Coercion may involve the threat of using violence, of force or criminal use of authority. Therefore the difference between both is that the word blackmail refers to a crime wherein the danger is the revelation of information, extortion involves a crime wherein the threat is either physical, violent or unfair use of power.

It is the act of giving money, goods or other forms of reward to a recipient in exchange for a modification of their behavior (to the benefit/interest of the giver) that the beneficiary would otherwise not alter.

It is an illegal activity where a person, organization, corporation or institution intentionally avoids paying his actual tax liability. Those caught evading taxes are subject to criminal charges and substantial penalties. To willfully fail to pay taxes is a federal offense under the Internal Revenue Service (IRS) tax code.

There are so several types of fraud and theft that require different methods for discovery. Every department inside a company or organization presents opportunities for employees to steal, although there are reports that an excessive amount employees in senior positions perform the thefts and that employees working in accounting and finance are the most persistent offenders.

Most fraud schemes fall into the following fraud categories.

How the Government Undertakes White-Collar Crime

Most states have offices that investigate white-collar crimes restricted to a single state, and many federal agencies investigate financial frauds that cross multiple states.

While the California Attorney General has focused recently on prosecuting mortgage fraud cases, law enforcement officials have also been targeting several other types of fraud, including among others, insurance fraud, workers’ compensation fraud, and Medicare fraud.